In 1943, Sorry, Wrong Number first aired on the Suspense radio program. The story by Lucille Fletcher went on to be adapted to become a movie, and a later production of the radio program won The Edgar Award for Best Radio Drama.

THE STORY
Mrs. Elbert Stevenson, an invalid woman confined to her bed, attempts to call her husband, who is working late. Frustrated with the busy signal, she seeks the help of the operator who connects her through to what she assumes is her husband's office phone. Instead of hearing his familiar voice, she listens in on a conversation where two men are plotting a murder. The victim is a woman, home alone, who lives near a bridge. The men plan for the attack to take place just as the train crosses the bridge, so the sound will mask any screams from the victim. 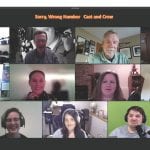